Public Allies Twin Cities is the local site of the National Non-Profit Public Allies. Public Allies delivers a 10-month Apprenticeship program in which participants learn leadership within a Social Justice Framework, work within a local nonprofit to build their capacity to best serve their constituents, and take the lead in a service project to develop their people and project management skills.Public Allies is an AmeriCorps program and all participants register as AmeriCorps service members making them eligible for a $6,000 education benefit, mental health resources, and if needed health benefits through the Corps network!We build the wave of leaders. Join the movement!

What you need to Know for the 2019 Elections?

(MINNEAPOLIS, MN, 6/28/2019) – The Minnesota chapter of the Council on American-Islamic relations (CAIR-MN) today called on law enforcement authorities to investigate a possible bias motive for an intrusion into a St. Cloud, Minn., mosque by a man with a dog.

CAIR-MN said the white male entered the Central Minnesota Islamic Center yesterday evening with a large dog. The man wandered in the mosque and was seen by worshipers as he left. When leaving the mosque, the man pulled hair from the dog and threw it on the floor. [NOTE: Anti-Muslim bigots often believe that taking a dog into a mosque is a way to desecrate the house of worship because of the false notion that Muslims hate dogs.]

The intrusion was captured on video surveillance. Local police are investigating the incident. 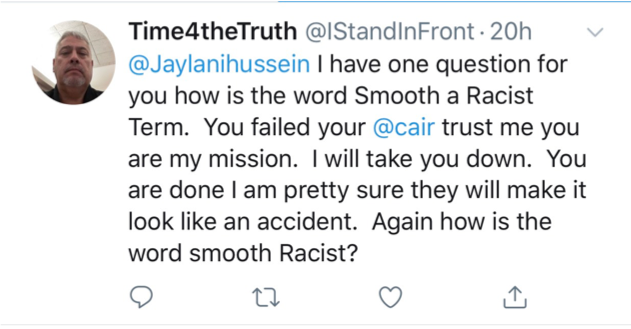 In a tweet, an anti-Muslim organizer who attended an event featuring a talk by Hussein this past Saturday at the Minnesota History Center, wrote: ". . .trust me you are my mission. I will take you down. You are done I am pretty sure they will make it look like an accident.” (grammatical errors maintained)

(MINNEAPOLIS, MN 8/5/18) - The Minnesota chapter of the Council on American-Islamic Relations (CAIR-MN), today called on law enforcement authorities in that state to investigate vandalism targeting a Maplewood, Minn., mosque as a hate crime.

Two suspects are reportedly shown in surveillance video spray-painting “666,” “Jesus saves,” a cross, and obscenities on a wall of Alsalam Mosque on July 29. (NOTE: In popular culture, “666” is often associated with references to the anti-Christ or the devil.]

We have 45 guests and no members online