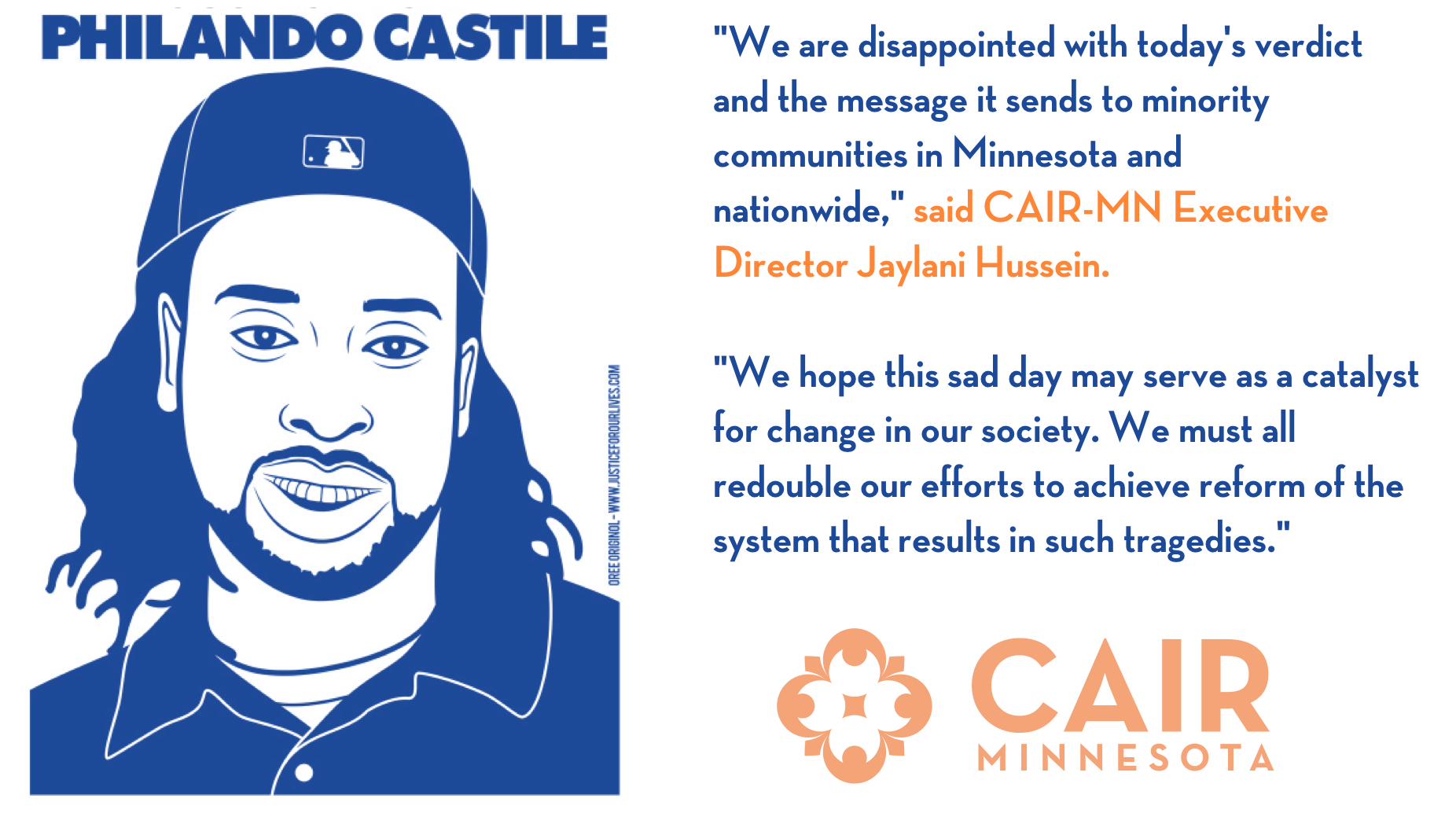 (MINNEAPOLIS, MN, 6/16/2017) - - The Minnesota chapter of the Council on American-Islamic Relations (CAIR-MN)  expresses disappointment with verdict of Castile case.

Almost a year ago, Philando Castile was killed in his car by Officer Geronimo Yanez. Today, after a week-long deliberation, the jury in officer Yanez's trial returned a verdict of not guilty on the charges of manslaughter and two weapons charges.

"We are disappointed with today's verdict and the message it sends to minority communities in Minnesota and nationwide," said CAIR-MN Executive Director Jaylani Hussein. "We hope this sad day may serve as a catalyst for change in our society. We must all redouble our efforts to achieve reform of the system that results in such tragedies."

"We extend our thoughts and prayers to Mr. Castile's family, to his fiancé Diamond Reynolds and his mother Valerie. Ms. Reynolds showed incredible bravery and composure during the incident, recording the aftermath of the shooting for the world to see, shining a light on the egregious injustice and in recounting the events in court. Valerie Castile has likewise acted as a pillar of strength throughout the trial, and offered messages of hope and calm to the entire community".

(MINNEAPOLIS, MN, 6/12/2017) -  - The Minnesota chapter of the Council on American-Islamic Relations (CAIR-MN) today welcomed a 39-year prison sentence for Anthony Sawina, who last year shot at five Somali-American men in a car on their way to prayers, injuring two.

See: Man gets 39 years for attempted murder of 2 Somali men

"Minnesota's Muslim community welcomes the sentencing of Anthony Sawina for the attempted murder of two Somali youth," said CAIR-MN Executive Director Jaylani Hussein. "As hate crimes targeting Muslims increase in our state, Minnesotans must all stand together against every one of these horrifying acts born of hatred and targeting innocent people."

Hussein added, "today we are witnessing both the rise of sophisticated and organized anti-Muslim groups like ACT for America, as well as the sudden and impetuous assaults on Muslims growing all too common in our communities."

(MINNEAPOLIS, MN, 6/3/2017) -- The Minnesota chapter of the Council on American-Islamic Relations (CAIR-MN) today called for an investigation into the alleged use of excessive force by a security officer and resource officer at a high school in that state.

In the process of her arrest, the student's hijab (head covering) was removed. She was taken to the Apple Valley Police Department, questioned and released.

On Friday, school officials met with the family of the student and informed them that she is suspended until the end of the school year.

CAIR-MN reports that it has received complaints from a dozen Muslim students at Apple Valley High School who feel unsafe due to this and other unreported incidents involving the same officer.

Hussein added that CAIR-MN has reached out to the school principal and are in talks about the incident. 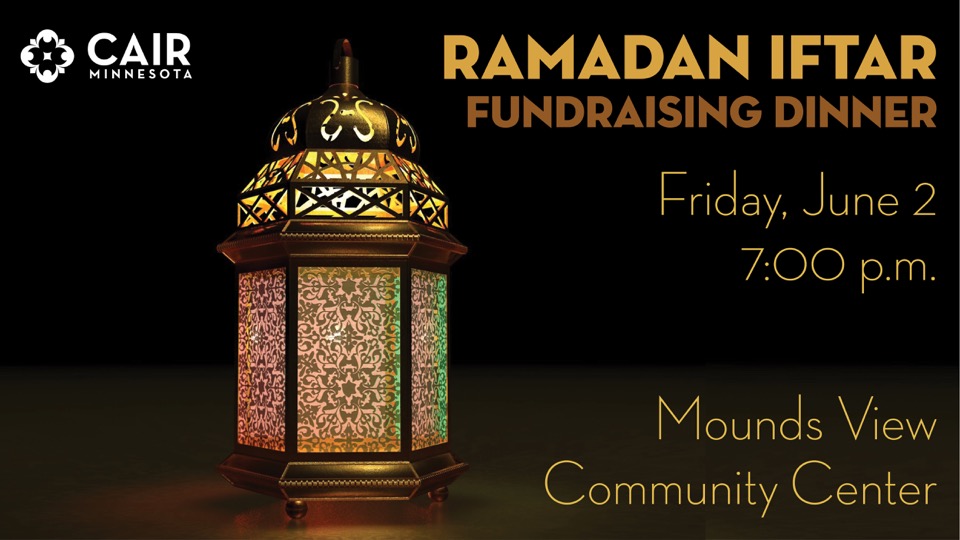 (MINNEAPOLIS, MN, 6/1/2017) - The Minnesota chapter of the Council on American-Islamic Relations (CAIR-MN) today announced the filing of a lawsuit in state court against UPS Mail Innovations and Doherty Staffing Solutions for firing multiple Muslim employees who wanted to pray during their break times after previously having allowed them to pray.

The plaintiffs stated that there had been no problem with them using their break time to pray until a new UPS operations manager was hired. He then terminated employees who wanted to pray. 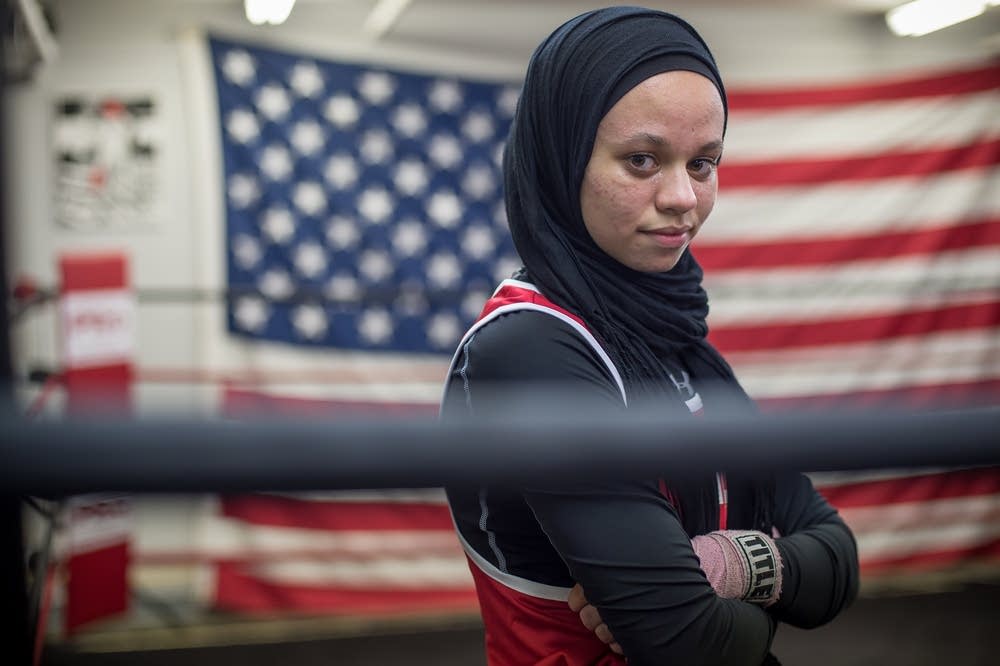 (WASHINGTON, D.C., 4/20/17) -- The Council on American-Islamic Relations (CAIR), the nation’s largest Muslim civil rights and advocacy organization, today welcomed a religious exemption granted to a teenage Muslim boxer in Minnesota who was previously barred from competition because she wears an Islamic head scarf, or hijab.

Amaiya Zafar, 16, from Oakdale, Minn., will be allowed to compete wearing hijab under a new rule covering religious exemptions that is expected to be formally adopted by the USA Boxing board of directors in June. Under the new rule, which applies only to local “non-advancing matched bouts,” a request for a religious exemption must be made for each event in which the boxer wishes to participate.

We have 104 guests and no members online